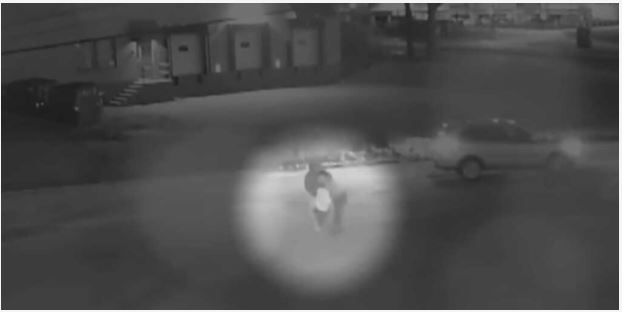 A dangerous situation was thwarted Sunday night when a brave woman helped stop an attempted kidnapping — and the intense, heart-pounding scenario was captured on security footage.

Listen to the latest episode of the Faithwire podcast below:

The startling scene unfolded in Burlington, Massachusetts, around 8:20 p.m., when a passerby said she noticed a man dragging a woman. So, she stopped her car to try and help, prompting the assailant to flee.

“I just saw some guy trying to abduct a girl,” the caller, later identified as Ariel Naylor, told 911 operators, with the victim, Zayra Mendoza, audibly sobbing in the background.

“I came around that last corner and there was the girl being dragged through the parking lot by, like, her hair,” Naylor said. “She had no clothes on the top half; he had ripped that off of her, and was dragging her and she was fighting like hell.”

The hero said it was rewarding to be able to save the woman and help her get home to her family.

As for Mendoza, the 37-year-old victim, she, too, shared her story, crediting the good Samaritan for helping her evade the attempted kidnapping. Her comments were translated by WCVB-TV from Spanish into English.

“When I looked, the man was right on top of me. I thought: ‘This man is going to rape me, going to kill me,’” the victim said. “I was screaming. I was trying to fight him off. He was dragging me by one arm. In the struggle, I was left topless. When the woman in the SUV drove by, thanks to her, it all stopped.”

Click Here to see a video from WCVB of the suspect arrested in the incident.

Security footage shows Mendoza walking down the road before the attack, with the man trailing close behind before he began chasing her and eventually grabbed and dragged her.

Mendoza, a mom of a 9-year-old, said she was thinking about her daughter during the attack. She also expressed gratitude to Naylor for helping save her.

“I want to say ‘thank you’ to her because she’s the only woman who stopped,” Mendoza said.

Police initially described the suspect as a white man in his teens or early 20s and made an arrest Tuesday.

Tyler Healey, 23, was apprehended Tuesday afternoon and faces various charges, including assault with attempt to rape and attempt to commit a crime, according to WBTS-TV.

blinking-dotLive updatesLive updates, Death toll rises to 21 after shooting at a primary school in…