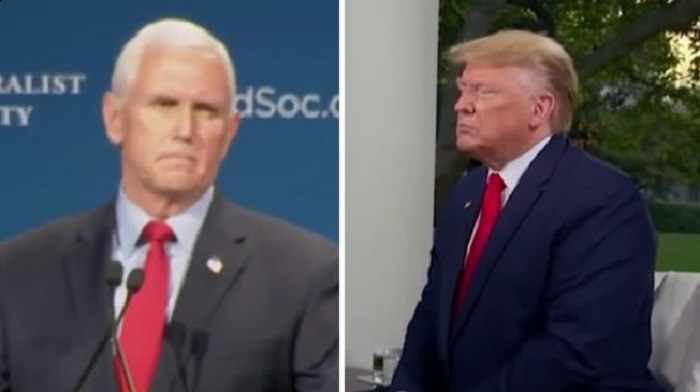 Donald Trump fired back at Mike Pence following the former Vice President’s pointed rebuke of the notion that he could have rejected the electoral votes of some states during the 2020 presidential election.

Pence, speaking at a Federalist Society event in Florida on Friday, broke with the former President.

“There are those in our party who believe that as the presiding officer over the joint session of Congress, I possessed unilateral authority to reject Electoral College votes. And I heard this week that President Trump said I had the right to ‘overturn the election,’” Pence said.

“President Trump is wrong,” he said in a direct denunciation. “I had no right to overturn the election.”

MIKE PENCE: “President Trump is wrong. I had no right to overturn the election. The presidency belongs to the American people, and the American people alone. And frankly, there is no idea more un-American than the notion that any one person could choose the American president.” pic.twitter.com/7feWD75Fq1

RELATED: Trump: Pence Was Right About Media Coverage Of Capitol Riot – It Was Meant To Demean Trump Supporters

Mike Pence didn’t hold back with his statement in any fashion, leaving many to wonder if this was an initial salvo in his attempt to run for the Republican nomination for President in 2024.

Pence’s next comments brought him a round of applause from the attendees at the Federalist Society event.

“Under the Constitution, I had no right to change the outcome of our election,” he declared. “And Kamala Harris will have no right to overturn the election when we beat them in 2024.”

Pence says Jan 6 was a “dark day” and reminds that the congress was reconvened to certify the election. Applause from Fed Society crowd.

Former President Donald Trump fired back at Mike Pence in typical fashion, issuing a statement replete with name-calling and continued insistence that the 2020 presidential election was stolen.

“Just saw Mike Pence’s statement on the fact that he had no right to do anything with respect to the Electoral Vote Count,” Trump wrote.

He accused the former Vice President of being “an automatic conveyor belt for the Old Crow Mitch McConnell to get Biden elected President as quickly as possible.”

Below that – how Pence circumvented this … via Politico .. Jan 7, 2021. https://t.co/EZrIlsKlVs pic.twitter.com/OhPm3NKRJE

The former President’s statement included an explanation on how Pence could have stepped in and overturned the election “if obvious signs of voter fraud or irregularities exist.”

“I was right and everyone knows it,” added Trump. “If there is fraud or large-scale irregularities, it would have been appropriate to send those votes back to the legislatures to figure it out.”

The integrity of elections isn’t just confined to Trump, however.

Democrats have recently begun to question the legitimacy of future elections by saying the 2022 midterm elections may be illegitimate due to Republican opposition to passing their national voting bill.

President Biden, when recently questioned by a reporter as to whether or not the President felt we would have free and fair elections in 2022, planted the conspiracy seeds.

“Oh, yeah,” he replied. “I think it easily could be illegitimate.”

This second attempt from Biden on whether the election will be legit is even worse.

“Oh, yeah, I think it could easily be illegitimate … The increase in the prospect of being illegitimate is in proportion to not being able to get these reforms passed.” pic.twitter.com/nCyuAWSMXm

While Mike Pence insists he could not have overturned the 2020 election, he has criticized the media for using January 6th to belittle supporters of Donald Trump.

“I know the media wants to distract from the Biden administration’s failed agenda by focusing on one day in January,” said Pence.

“They want to use that one day to try and demean the character and intentions of 74 million Americans who believed we could be strong again and prosperous again and supported our administration in 2016 and 2020,” Trump’s former right-hand man continued.