Home News Turkey's inflation soars to two-decade high of almost 49%
Consumer prices jumped 11.1% from the previous month, the Turkish Statistical Institute (TUIK) said, eating deeply into Turks’ earnings. Both measures were higher than expected in a Reuters poll, which forecast 9.8% monthly and 46.7% annually.
The lira shed 44% of its value last year as the central bank slashed interest rates by 500 basis points since September to 14%, under Erdogan’s drive to prioritize credit and exports despite the double-digit price rises.
Partly in response to the currency turmoil, the government raised a series of administered prices this year including for gas, electricity, road tolls and bus fares, adding to inflationary pressure. The monthly minimum wage was hiked 50%.
Transport-related prices soared 68.9% year-on-year in January, while food and drinks prices jumped 55.6%, driving overall inflation to its highest level in Erdogan’s nearly two decades in power. 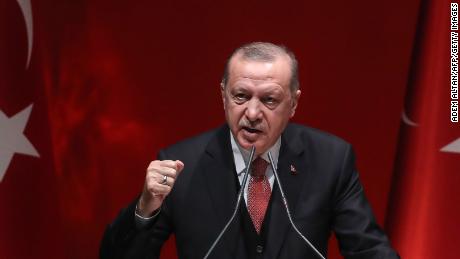 The lira edged down 0.5% to 13.56 against the dollar at 0748 GMT (0248 ET). It has stabilized after wild swings — from 18.4 to 10.25 — in December due in part to state market interventions and a deposit-protection scheme.
“We have a policy rate of 14% and inflation at 48%… and a government that covers for the FX gap. It’s a bad cocktail for the long-term,” said Ipek Ozkardeskaya, a senior analyst at Swissquote.
The lira “can only hit back as there is a serious deviation between what should be done and what is being done. But for now, I am stunned to see the lira as unresponsive to the news,” she said.
In a reflection of the recent foreign-exchange volatility, the producer price index soared 10.45% month-on-month in January for an annual rise of 93.53%, the data showed.
Several analysts expect year-on-year inflation to surpass 50% this quarter and to remain above 40% for much of the year before easing toward the end.
In an interview with Japan’s Nikkei, Finance Minister Nureddin Nebati predicted inflation will remain below 50% and peak in April.
On Saturday, Erdogan replaced the head of TUIK. Opposition parties and some economists have cast some doubt on the agency’s figures, claims TUIK has dismissed. Polls show Turks believe inflation is higher than official data suggests.