Home News US and Germany working in ‘lockstep’ on Ukraine crisis: Biden 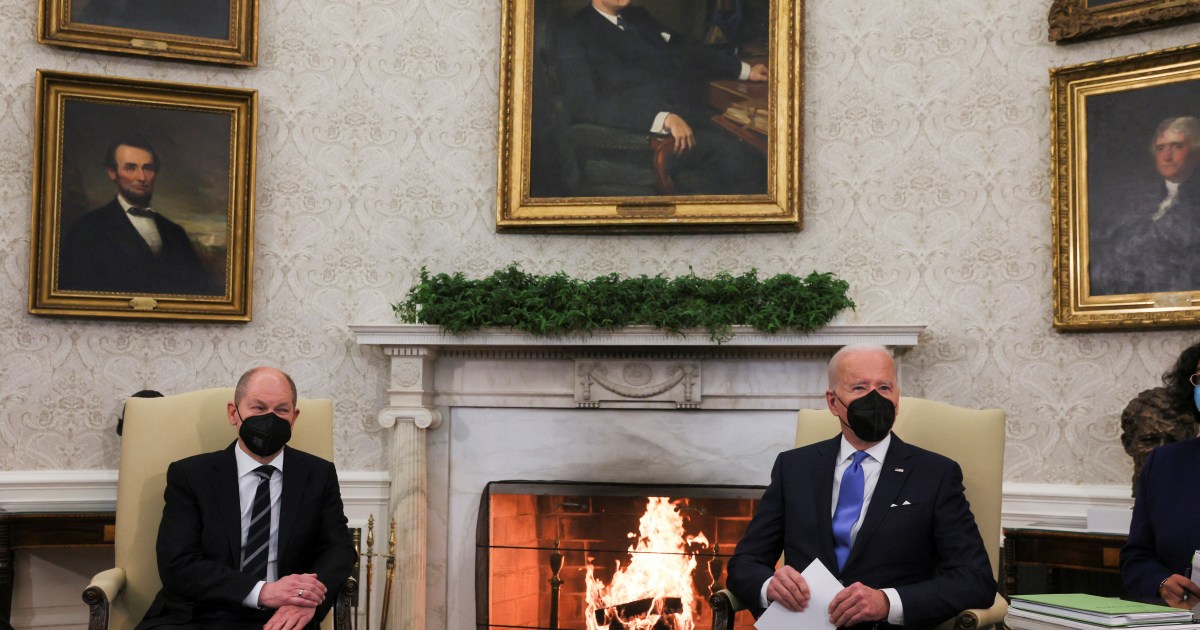 The United States and Germany are working in “lockstep” to deter Russian “aggression” in Europe, US President Joe Biden has said, as he met with German Chancellor Olaf Scholz at the White House on Monday.

Amid growing tensions in eastern Europe, Scholz held in-person talks with Biden on February 7 for the first time since coming to power in Germany late last year.

“We are closest allies and working intensely together,” Scholz told reporters. “And this is necessary for doing the steps that we have to do – for instance, fighting against Russian aggression against Ukraine. So it’s an important meeting at a very, very important time.”

The meeting came hours after the United States and the European Union expressed “firm support for a strong and resilient Ukraine” following a meeting of the US-EU Energy Council.

Europe depends heavily on Russian energy exports – and weeks of ongoing tensions along the Russia-Ukraine border have fuelled fears that Moscow could cut European nations off from critical supplies.

“Mindful of the rapidly changing energy landscape and the continued risks to energy security, including cybersecurity of energy infrastructure, the US-EU Energy Council works to enhance energy security and promote energy diversification,” the US and EU said in a joint statement.

The Russian military has been amassing troops near the country’s border with Ukraine, sparking a diplomatic crisis and heightening US and European fears that Russia may be preparing for an imminent invasion of its neighbour.

Russia has denied that it is planning to invade Ukraine, but it has adamantly opposed the country’s efforts to join NATO.

Moscow also is seeking security guarantees that the US-led alliance will stop its expansion into former Soviet republics, but Washington and NATO have rejected the demand as a “non-starter” while saying they are open to discussing arms control measures in Europe.

Germany has taken a less forceful approach to Russia than some of its western allies, refusing to send weapons to the Ukrainian army — a move that garnered rebuke from Kyiv.

But Scholz and Biden appeared to present a united front on Monday.

“To state the obvious, Germany is one of America’s closest allies — working in lockstep to further deter Russian aggression in Europe, and to address the challenges posed by China and promote stability in the western Balkans,” the US president said.

At a news conference after the meeting, Biden also called Germany a “leader in pushing de-escalation of tensions and encouraging dialogue” with Russia. “Germany and the United States, together with our allies and partners, are working closely together to pursue diplomatic resolutions in this situation. And diplomacy is the very best way forward for all sides,” he said.

Scholz said it is important that the US and Europe speak with “one voice”, calling Russia’s posture towards Ukraine a “serious threat” to European security. “We made it very clear, if there is a military aggression against Ukraine, this will entail severe consequences that we’ve agreed upon together,” he said.

Washington has previously taken aim at Nord Stream 2, an $11bn gas pipeline between Russia and Germany across the Baltic Sea that is opposed by Ukraine and other European countries. The pipeline, which has faced US sanctions, is yet to go into operation.

On Monday, Biden said the US will not allow the pipeline to pump gas if Russia invades Ukraine. “If Russia invades – that means tanks or troops crossing the border of Ukraine again — then there will be no longer a Nord Stream 2; we will bring an end to it,” the US president said.

Asked about his position on the issue, Scholz did not answer directly, but stressed transatlantic unity. “We are absolutely united, and we will not be taking different steps; we will do the same steps, and they will be very, very hard on Russia,” said Scholz, in one of the few remarks he made in English, instead of speaking through a translator.

Al Jazeera’s Mike Hanna, reporting from Washington, said the two leaders tried “very hard” to show that they are on the same page, though Biden was adamant in saying the US would shut down Nord Stream 2 if Russia invades Ukraine. “Interestingly enough, the German chancellor would not be drawn on what Germany’s position was on that pipeline should sanctions be imposed,” Hanna said.

Earlier on Monday, speaking alongside EU foreign policy chief Josep Borrell, US Secretary of State Antony Blinken said the US and its allies have developed a “quick action response” to impose massive costs on Russia if it invades Ukraine.

“We’re all driving the same message – we’re willing to continue a substantive conversation with Russia on mutual security concerns,” Blinken said. “The diplomatic path is clear. At the same time, we and our allies are resolved that there will be real and profound consequences should Russia choose to continue aggression.”

For his part, Borrell urged Russia to de-escalate the situation, calling the Ukraine crisis the “most dangerous moment for the security in Europe after the end of the Cold War”.

He also accused Moscow of being open to using its energy supplies to Europe for geopolitical leverage. “That’s why our immediate priority is to diversify the sources of energy, in particular the gas flows, to avoid supply disruption from our main supplier, who is Russia, and to ensure that the world energy markets will be liquid, competitive, and well-supplied,” Borrell said.

Meanwhile, French President Emmanuel Macron also held talks with his Russian counterpart Vladimir Putin in Moscow on Monday — the most senior visit by a NATO head of state to Russia since the impasse over Ukraine began.

Al Jazeera’s Dorsa Jabbari, reporting from Moscow, said Macron is seen in the Russian capital as a “man who is trying to make peace”.

“He is coming here in the hopes of trying to clarify some of the sticking points that Russia has when it comes to NATO,” she said. “There’s also a sense that Macron is trying to position himself to be seen as a peacemaker back home for a domestic audience.”

Noise Flair XL Neckband Earphones With Up to 80 Hours Battery Life Launched in India: Price, Specifications
OneCoin Ponzi Scheme Mastermind Ruja Ignatova Added to FBI’s Top Ten Most Wanted List
Tunisian constitution committee head condemns president’s draft
France in Focus: The legacy of colonialism in France
Police say the repeal of Indiana’s handgun permit law means someone openly carrying a gun can be on a sidewalk eyeing a school but cops can’t legally ask them what they’re doing
A couple who live on a sailboat full-time share 4 perks and 7 brutally honest downsides to life on the sea
Share This Post
Comment