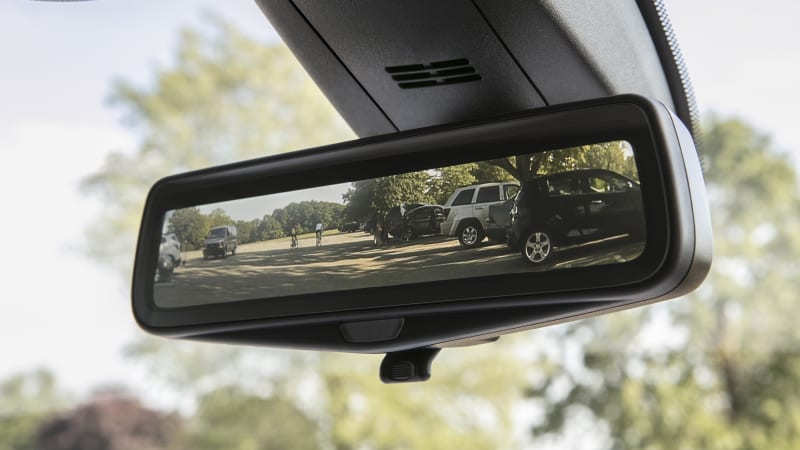 Among some of the best enhancements to appear on modern automobiles are the myriad cameras placed around them. Even on cars with great visibility, cameras offer so many benefits. They help us see stuff while we’re backing up, find curbs while parking, check blind spots and hook up and maneuver trailers. We even gave Kia a Tech of the Year award in part because of the company’s enormously useful blind-spot cameras, which also appear on our long-term Hyundai Palisade. They’ve gotten better over time, too, with greater resolution and handy overlays.

They’re so good that car designers‘ decades-long dream of using cameras and screens for rear-view mirrors seem possible. In fact, in Europe and Japan, you can get cars with only cameras for mirrors, such as the Honda E and Audi E-Tron. They offer potential aerodynamic improvements and even larger visual angles. And yet, despite all this, I think it would be foolish to get rid of the old-school mirror.

The reasons are actually pretty straightforward. First off, there’s clarity. As good as cameras have become, they’re still not as sharp as actual images reflected into your eye. It’s the highest definition you can see, quite literally. And it doesn’t run into issues with graininess or bad exposures with poor lighting. And when you’re trying to merge into another lane with lots of traffic, you want as clear a picture as you can get.

Along those lines, mirrors are far less affected by inclement weather and the aforementioned bad lighting. I’ve driven many cars in heavy rain and snow, and they frequently make blind-spot cameras a blurry, muddy mess that are completely unusable. In the dark, bright headlights can be an issue, too. Even in salty conditions, salt residue and other dirt can build up. Yes, mirrors can have ice on them, but heated mirrors fix that, and rainwater slides right off regardless. Plus, the interior rearview mirror is unaffected, and the rear window almost always has a defogger and sometimes a rear wiper, making it mostly immune to weather.

Furthermore, mirrors offer something cameras can’t, or at least not with the displays that are currently used: depth perception. This is something I’ve become aware of when using some of the rear-view camera displays in rear-view mirrors. Because the mirror is reflecting exactly what’s outside, it’s effectively like looking out a window with your own eyes, which gives you a three-dimensional view, and you can judge distance. That’s obviously very helpful when deciding if there’s room for you to merge, or even when parking, and it doesn’t require guidelines. Furthermore, because of the depth perception, your eyes focus as though they’re looking at a more distant object. As such, it’s easy for your eyes to move from looking ahead through the windshield to the mirrors. With cameras, you’re looking at a two-dimensional image. You don’t get a sense of distance, and your eyes are focusing on the display, a bigger change than looking at the object in the distance.

Finally, mirrors are dead-nuts reliable. It’s a piece of glass over a reflective surface. It doesn’t require anything else to work. It doesn’t need any power, wiring harnesses, cameras, lenses, screens. It has almost no failure points. Anecdotally, my parents’ Mazda3 has developed an issue where the back-up camera stops working, seemingly because the wire sometimes gets disconnected on a hard hatch slam.

I’m not saying cameras are bad by any means. As I noted in the opening paragraphs, they’re pretty awesome, and I like having them, lots of them. But they’re most useful as a complement to the mirrors, and for specific situations where mirrors are limited. And really, having both is the absolute ideal. New technology is good, but it’s even better when paired with the best old technology.