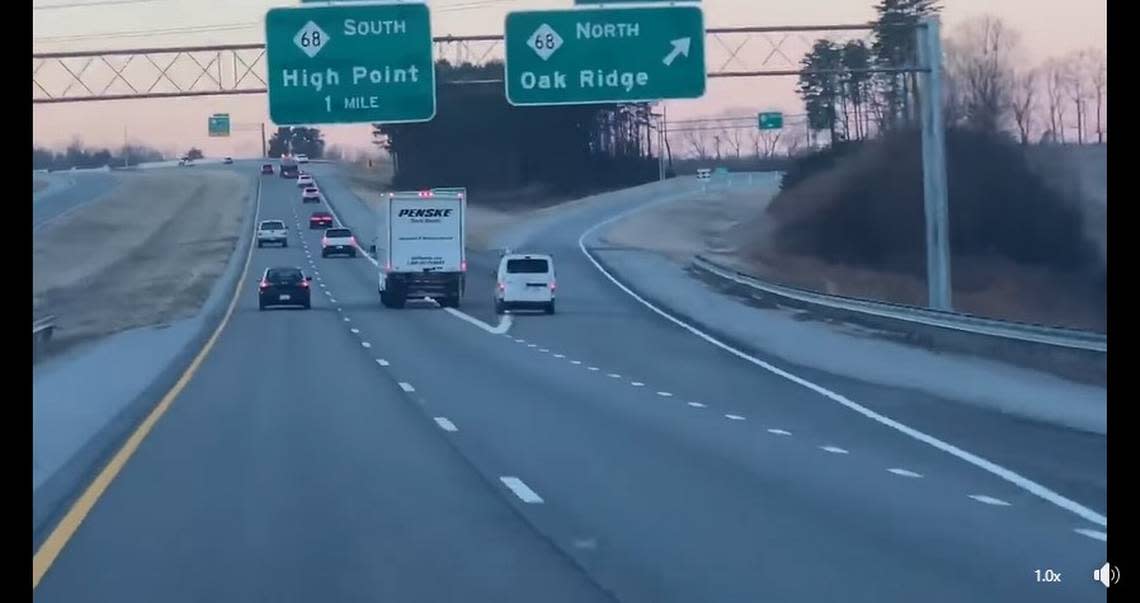 Two drivers are facing charges after a chaotic road rage encounter on a North Carolina highway was captured on video, according to state law enforcement officials.

The nearly two-minute video posted on Facebook just after 8 a.m. on Wednesday, Feb. 9, showed a white van and black sedan swerving in and out of traffic before a North Carolina State Trooper caught up to them. The person recording, identified by WAVY as Pete Denny, provided colorful commentary throughout.

“Look at this fool,” Denny said in the first few seconds of the video. “Look, look at this dude, man. Going in the right lane! Boy, somebody p—-d somebody off this morning.”

The video has been watched more than 434,000 times and generated over 4,000 reactions and comments as of 5 p.m. on Feb. 11. It was also posted on the “Public Freakout” Reddit page, which has 3.8 million followers.

Christopher D. Knox, a spokesperson with the N.C. State Highway Patrol, identified the drivers as 62-year-old Jerry Ray Wyatt, of Eden, and 25-year-old Joshua Ian Livesay, of Mayodan. Both were charged with failure to maintain lane control and careless or reckless driving.

Knox said a trooper assigned to Guilford County first clocked the two drivers at 7:20 a.m. on N.C. 68 near Pleasant Ridge Road on Feb. 9. Wyatt was driving a white Nissan van and Livesay was driving a black Mazda. The trooper pulled them over after a “near collision,” Knox said.

Denny, who owns TGI Turf Services Inc. and posted a video of the encounter on his business’ Facebook page, had been driving behind them for several minutes before law enforcement arrived.

At the start of the recording, the utility van is seen swerving to the right of a semi-truck carrying lumber and driving on the shoulder in an apparent attempt to overtake the Nissan. A few seconds later, Denny is heard saying that “they’ve been at it for at least six or eight minutes trying to cut each other off.”

The driver of the van made a second attempt to pass the Mazda as they approached the Oak Ridge exit on N.C. 68 by speeding into the exit lane, swerving around a Penske moving truck before getting back on the highway, the video shows.

“Golly, there he goes again,” Denny said in the video. “He’s going to kill somebody!”

The van then continued to tail the Mazda from behind as they changed lanes.

“He is all up on that lady. Look, road rage! Get away from her, dude,” Denny said in response, unknowingly thinking the Mazda was driven by a woman instead of Livesay. He added that he was unknowingly driving 100 mph to keep up with them.

The video cut to a different section of roadway at about the one-minute mark as the two drivers tried to merge into traffic. The van, however, got too close, and the black car is seen running off the road into the center median.

That’s when a state trooper shoots through traffic with lights flashing.

In the final seconds of the video, a trooper can be seen immediately exiting his car as Denny drives by.

‘Angry’ driver pulls up to man and shoots, sending him to hospital, Georgia cops say