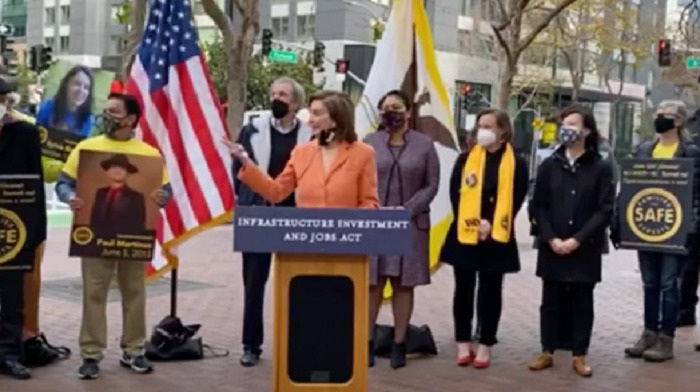 A highly energized detractor of the President interrupted a press conference with Nancy Pelosi, shouting “Let’s Go Brandon” followed by a ‘Woo!’ that would have made Ric Flair jealous.

The House Speaker was delivering a speech in San Francisco celebrating the benefits of the recently passed $1.75 trillion infrastructure bill known as the ‘Infrastructure and Jobs Act.’

Pelosi (D-CA) turned to introduce the next guest at the event when a man off-camera interrupted.

Pelosi turned towards the heckler, paused for a very brief moment, but otherwise did not acknowledge him.

‘Let’s go Brandon,’ for those living under a rock for the past several months, is a euphemism for the more vulgar and ultimately more satisfying phrase – ‘F*** Joe Biden.’

The inside joke is the result of NBC Sports reporter Kelli Stavast interviewing NASCAR driver Brandon Brown, who was interrupted with a very clear and vociferous chant of “F*** Joe Biden.”

Stavast tried to tell viewers the crowd was chanting a much more palatable but very incorrect, ‘Let’s go Brandon.’

At a NASCAR race, this announcer tells driver Brandon Brown that the fans behind him are chanting “Let’s go Brandon” when they are clearly saying “F Joe Biden!”! The media is truly sickening. They avoid the truth at all cost. pic.twitter.com/GFVnqaLvrS

The phrase, which is enjoying cult-like status, has been cropping up nearly everywhere.

It’s even been turned into several chart-topping songs.

Now, not even Pelosi can escape the latest trend in contempt for President Biden.

RELATED: Biden Says The Unvaccinated Will Face A Winter Of ‘Severe Illness And Death’

In an inappropriate example of the ‘Let’s Go Brandon’ phenomenon, Biden was greeted by the jeers as he arrived in Kentucky to survey the damage left behind by tornadoes that killed over 80 people earlier this month.

Two “Let’s go Brandon”s from the crowd as Biden gets out pic.twitter.com/1syheIGQx0

Polls have consistently shown President Biden’s approval rating growing increasingly worse despite having a Democrat majority in Congress and a very eager and helpful media.

Republicans are reportedly gearing up to launch multiple investigations into the Biden administration should they win back the House in 2022.

Those investigations include, but are not limited to, the deadly troop withdrawal from Afghanistan, weaponizing the DOJ against parents claimed to be ‘domestic terrorists,’ the humanitarian crisis at the border, and the President’s fumbling of the pandemic response.

Mexican drug cartel gunmen burn shops, cars to avenge arrests
The un-Kenyan election
The FBI was tipped off by an informer close to Trump who guided them to where documents were kept, according to reports
A California man claims in court documents to have caught his wife trying to ‘kill’ him by pouring Drano into his drinks
Breadbasket Diplomacy: Preserving Wheat as a Tool of American Statecraft
Amateur Hour Part II: Failing the Air Campaign
Share This Post
Comment