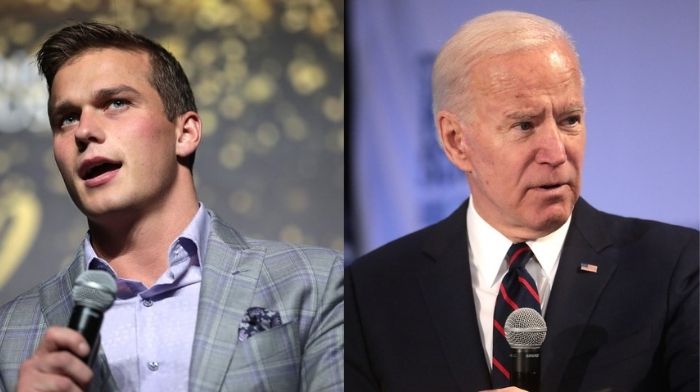 On Wednesday, during a speech on the House Floor, Rep. Madison Cawthorn (R-NC) ripped President Joe Biden as an “inept, geriatric despot.”

America is suffering one of the most incompetent Administrations in history.

Joe Biden is not worthy of what our Founding Fathers built.

RELATED: CNN Anchor Gets Emotional Over Defending Zucker, Who Resigned Over Secret Relationship With Subordinate

Rep. Cawthorn did not hold back, and in fact, may have given voice to what many Americans are thinking:

“Madam Speaker, the sons and daughters of America are not foot soldiers for your party’s inept, geriatric despot. They are not expendable pawns to be dispatched at the whims of an idiot, tossed carelessly around the world to Godforsaken caves and bloody sandboxes. They are Americans, worthy of honor and dignity. The only salute from them Joe Biden deserves involves one finger.”

In a sign of the realignment of the parties on the issue of foreign adventurism and imperialistic policy, the Republican Cawthorn sounded very much like your average Democrat from the Iraq War era.

He continued, “Our greatness is forged in our resistance to interference. The war lobby has no ally in the America-first Republicans. We will preserve our strength through nationalism.”

The path to American national security does not lie in American international interventionism.

It lies in securing our southern border, not the Russia/Ukraine border.

Our greatness is forged in our resistance to interference. pic.twitter.com/G1X3jiRkcU

It is not the first time Republicans have included the word “geriatric” in a description of Biden.

RELATED: MSNBC’s Jason Johnson Says Trump ‘Has To Be Jailed’ Because He’s A ‘Direct Danger To American Democracy’

War With Russia Not Sitting Well With ‘America First’ Republicans

And there are plenty of Republicans siding with Cawthorn. One of the most outspoken on the issue is Sen. Josh Hawley (R-MO). Hawley has sent letters to both Sec. of State Antony Blinken and Defense Sec. Lloyd Austin for “clarity about the Biden administration’s support for Ukraine’s prospective membership in NATO.”

Hawley also appeared with Fox News Channel’s Tucker Carlson Tuesday night. He told Carlson that Ukraine’s acceptance into NATO, which is at the heart of the Biden administration’s interest in Ukraine, iwould mean more American troops in Europe.

This despite our own serious national security problems on our own border.

Rep. Matt Rosendale (R-MT) has pointed out the glaring problem with the priorities:

“Despite claims by war hawks on both sides of the aisle, it is not in our national interest to spill American blood and treasure in Ukraine. A nation that cannot effectively secure its own border and protect its own territorial integrity cannot be responsible for doing so for nations in Eastern Europe.”

“Russia invading Ukraine is not an immediate threat to the security of the American people, homeland, and way of life. The flow of dangerous drugs, crime, and criminals over our sovereign border is.”

Democrats Now The Ones Demanding War

But what a difference just a few years makes.

For Democrats, increasing escalation with Russia with no plan or clear objectives is a given. And whoever questions a war that must be inevitable for them, they are dismissed merely as “Russian propagandists” or “agents of Putin.”

The Washington Post’s Jennifer Rubin tweets that Sen. Hawley is of course a Russian agent.

The replies are filled with leftwing Americans echoing the same sentiment.

Really, anyone that asks valid questions about going to war with Russia, or even those that Democrats disagree with, has their patriotism questioned, and of course must be a Russian agent.

There are Russian agents in the trucker convoy in Canada, (who are also racists).

The prime time line-up at Fox News are no doubt Russian agents.

But the ultimate rule of thumb for Democrats flushing out all the Russian agents and agents of Putin running around, don’t deny you are a Russian agent.